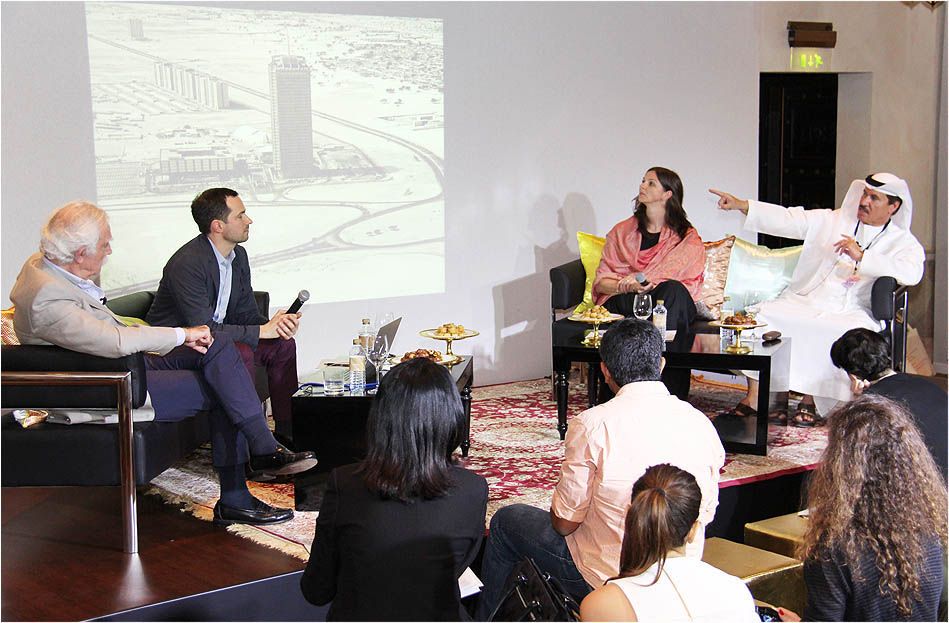 The Falconcity of Wonders – Dubai’s premier real estate ongoing mega project that will feature the Wonders of the World, was received with great acclamation, as chairman H.E. Salem Al Moosa took to the stage along with experts from the fields of art, architecture, film, literature, history and theatre at the Global Art Forum 2014, Art Dubai’s programme of live talks, presentations and commissioned projects. The Global Art Forum took place at Mina A’Salam, Madinat Jumeirah.

This year’s forum, titled “Meanwhile… History” was an in-depth exposition touching upon essential topics and turning points in history-significant decades, years, days, minutes or seconds that shifted an understanding of the world. H.E. Salem Al Moosa-along with professors Adina Hempel and Todd Reisz, and urban planner Anastase Emmanuel – participated in the session titled 1971-79: The Short Seventies related to the UAE’s art heritage and its contribution to the country’s overall progress and development initiatives, with a special emphasis on deep-seated traditional values instilled in the Nation’s architectural evolvement since the 1970’s.

Of the event, H.E. Salem Al Moosa said “Our heritage has survived the test of time, the evidence of which can be affirmed by the design element that has sustained itself in the Nation’s architectural facade. Sustainability is our number one priority, and we aim to continue expending our efforts to enhance innovatory standards that are in line with UAE’s heritage. The direction of HH Sheikh Mohammed in this regard has been the impetus for us to make the necessary breakthroughs, and to help promote cultural understanding to the outside world.”

The panel also focused on the immense achievements of Dubai’s former Ruler – the late Sheikh Rashid Bin Saeed Al Maktoum in plotting Dubai’s architectural blueprint in addition to its overall life-support infrastructure, paving the way to establishing the necessary social and public amenities, and thereon making giant leaps in establishing a veritable human workforce to complement its property infrastructure blueprint.

In addition a special heartfelt tribute was ascribed to his endeavor in envisioning and executing the old Dubai Airport and Port Rashid projects as transportation hubs that would be the starting point of Dubai’s prowess as a commercial pipeline and pivot for trade activities.

It also delved into a detailed exposition of the many setbacks and limitations faced due to its humble beginnings, and how a stalwart leadership on the part of its then incumbent rulers helped steer the UAE to financial dominance.

Continuing on to highlight H.E. Salem Al Moosa’s tremendous contributions in the Dubai World Trade Centre project and other colossal architectural developments during the decade, it then took on a very informative outlook, with H.E. Salem Al Moosa walking the audience through his encounters with the late Sheikh Rashid Bin Saeed Al Maktoum and other members of the royal family, a series of anecdotes that were reminiscent of the country’s history and development, his interactions with key business figures and industrialists that facilitated the national endeavor – at times taking on a light-hearted witty tone, while at other times tugging at the nostalgic strains of a modest era.

The panel was well received by the audience and considered a grand success in its entirety due to its comprehensive subject coverage, with the after-session witnessing continued queries about the progress of Falconcity of Wonders .

The Falconcity of Wonders also made a donation to the Dar Al Ber Society in collaboration with the Art Dubai organizing committee to support the Quran Memorization Project, as part of their mutual interest to proliferate Islamic cultural activities in the UAE.

This year’s edition of the iconic art event is proclaimed to be the biggest so far since its inception in 2007, featuring 85 galleries from 34 countries and over 500 artists participating across its programme spectrum. Known as the region’s largest global art fair, Art Dubai took place from the 19th – 22nd March 2014, witnessing the participation of 70 museum groups, and attended by more than 400 international curators from all over the world.